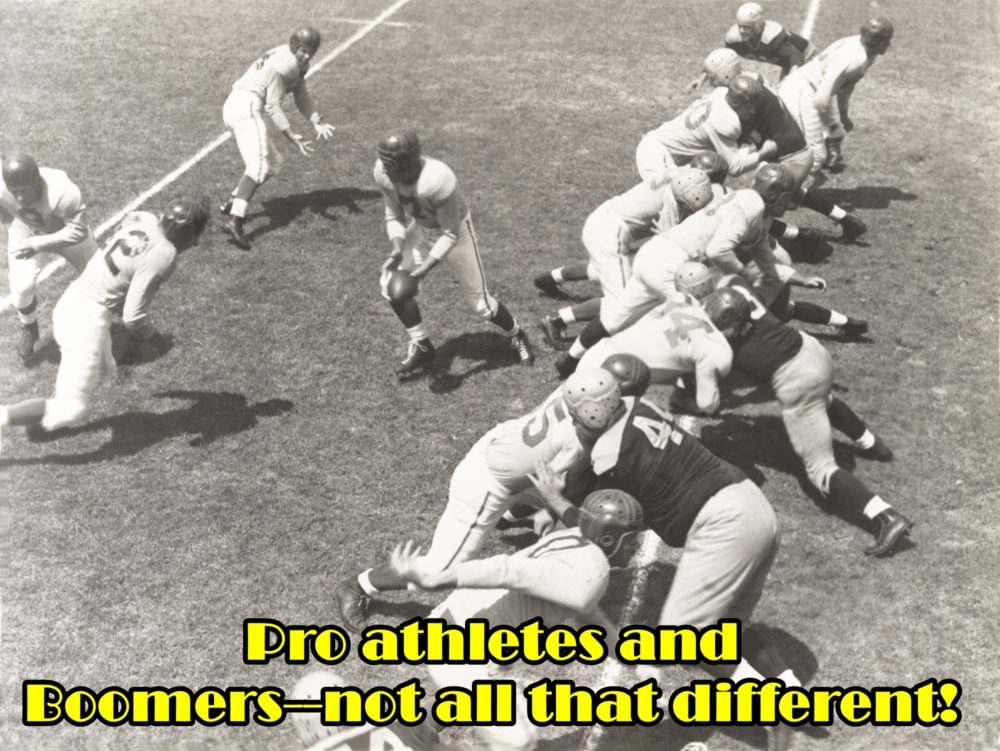 The takeaway: There are four ways we Boomers ruin our retirement lives. The only time we really hear about these four ways is when a pro athlete makes the news for squandering millions and being broke.  Bulletin: We Boomers are just as capable of squandering our lifetime earnings and ruining our retirement lives.  Avoid these pitfalls, Boomer.
(Updated November 2019.)

Quarterback Bernie Kosar had an amazing talent for football.  In 1983, while majoring in finance and economics, he led the University of Miami to its first national championship.

He was subsequently drafted by the Cleveland Browns, where he now ranks third in team history for passing yards.  He ranks fourth for passing touchdowns.

During the course of his career, he earned about $19 million.

Thirteen years after he retired, he filed for bankruptcy.

Bernie Kosar, you, me:  we’re all vulnerable.

The very same things that destroy the pros financially destroy Boomer retirements. Star sports agent, Leigh Steinberg, tells Forbes that the four main reasons so many pros go broke is due to:

It’s the same way for us.

#1.  Failure to realize how rapidly a career can end.  According to the Employee Benefit Research Institute, in 2019, 40% of workers left the workforce sooner than they expected. (p.37)

The two most common reasons were:

Both proved to be career ending.

Boomer, I don’t know about you but, off the top of my head, I can instantly think of four friends who had unexpected career-ending job losses.  They occurred when:

Careers can end before we’re financially (and psychologically) ready.

#2.  Giving away too much money to family and friends.  Let’s face it.  Most of us know people who are helping pay the rent, mortgage, and/or car payment for their adult kids—and even their grandkids.

Before I knew better, I myself kicked in mortgage payments, bought a new roof, and gave away a perfectly good car to a family member who had unending needs for a bail out.

I speak from experience when I say, “Don’t do it!”  As I discuss in Seven Simple Ways to Not Outlive Your Money (available in green sidebar), research shows that, with few exceptions, we’re turning these people into financial underachievers when we “help.”

One day we may not be here.  Then what’ll they do?  Boomer, I know it’s hard, but just say no.

#3.  Divorce. Research shows that while the divorce rate for most age groups has stabilized, Boomer divorce has doubled since 1990.

With each divorce, assets are cut in half—and so is net worth.  (This is such a major wealth killer for Boomers that I covered it here.)

#4.  Lack of competent financial planning advice.  Like pro athletes, most Boomers’ education did not include any classes on personal budgeting or financial planning.  All of us are vulnerable to unscrupulous advisers who want to “help” us with our assets.

The New York Times chronicled a couple in their seventies who were afraid they’d outlive their money.  They paid a visit to their friendly US Bank branch, where they’d had accounts for decades.

Staff knew them on a first name basis and happily sold them an annuity.  The annuity came with hidden fees of $26,000 a year.

Boomer, with annual annuity fees of $26,000, they could have bought a new car each and every year.  They’re stuck unless they want to pay more than $45,000 in surrender charges to get out of the annuity.

Know this:  not all financial “advisers” are legally bound to put your interests before their own.

When you ask question #2, you’re essentially rephrasing question #1.  You’re giving them two chances to tell you the truth.

Knowledge isn’t the only power.

Boomer, let’s face it.  We’re not that different from Bernie Kosar.  Our jobs could end before we expect them to.  We could overspend on family and friends.  Financial jackals could relieve us of our lifelong earnings.  We could go through a bad divorce.

So be vigilant, Boomer.  Avoid these popular pitfalls.

Knowledge may be power, but so is money.