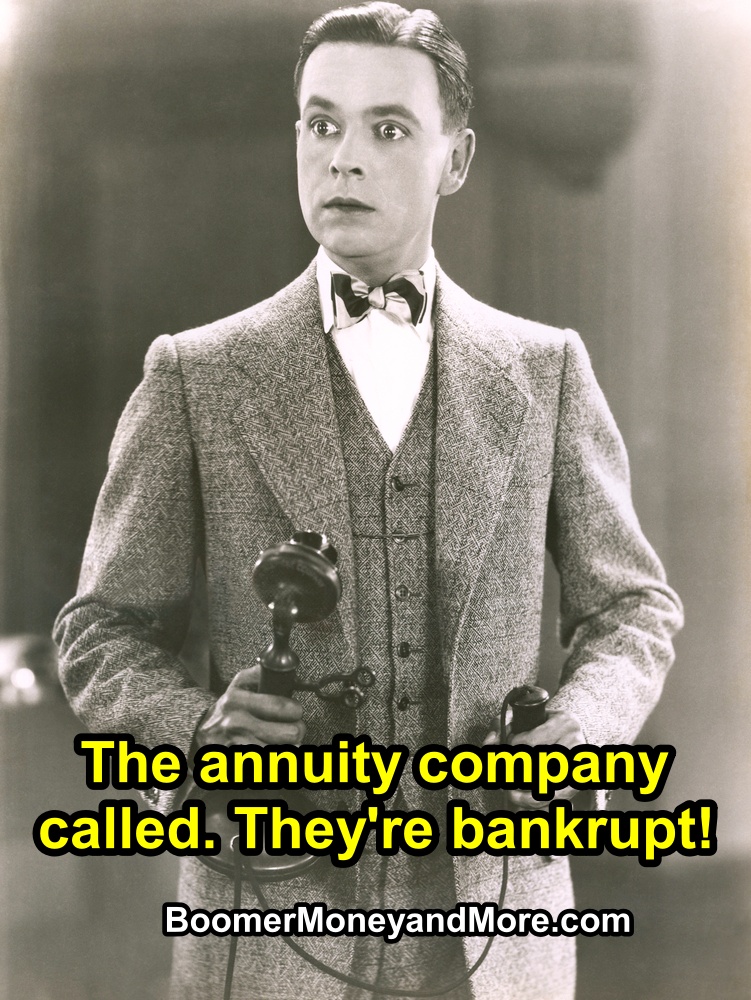 The takeaway:  An annuity bankruptcy doesn’t happen everyday, but it does happen.  (Just ask me.)  Protect yourself with these three must-do actions. Don’t be my younger self!

Part 3 of a series on annuities that will appear here from time to time.

All I had to do was swing by the bridal shop, pick up my freshly pressed wedding gown, and head to the church.  Mr. Boomer Money and More was waiting for me there to tie the knot.  In great anticipation, I danced down the stairs of my apartment building, twirled to the carport, and there it wasn’t. 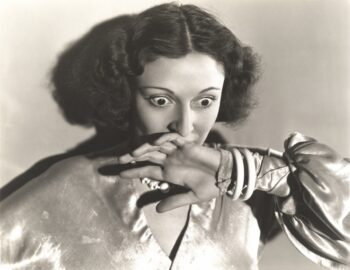 Where the devil is my…?

Sometime between the rehearsal dinner and my morning breakfast, my car had been stolen.  The Los Angeles police department (LAPD) told me not to expect to get it back.  Forty years later, when I can’t find my car in a massive parking lot, there’s a brief moment when I think the car’s been stolen.

It’s the same thing when you buy an annuity that goes bankrupt.  You don’t forget the experience.  (Trust me.)   All you can do is learn what you should have done.

An annuity is only as financially dependable as the company selling it.”

As we discussed here, an annuity is an insurance policy designed to ensure you don’t outlive your money. 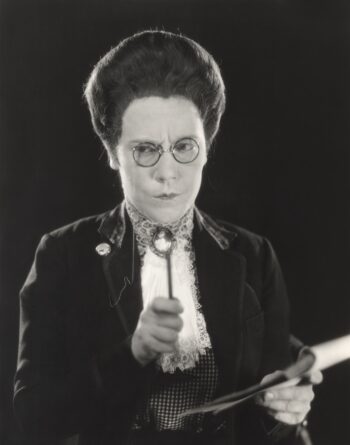 This will be on the test. List the three must-do actions when buying an annuity.

You pay an annuity company money. In return, they pay you back that money—with interest—for a certain number of years or the rest  of your life, whichever you prefer.  You only pay tax on the interest.

What could go wrong?

Well, for starters, the annuity company could go bankrupt.

Annuity bankruptcies are about as common as having your car stolen on your wedding day.  Still, they do happen.

Today’s post is designed to make sure you don’t buy an annuity headed for bankruptcy. “

Take action to avoid an annuity headed for bankruptcy

Protect yourself by these three must-do actions. 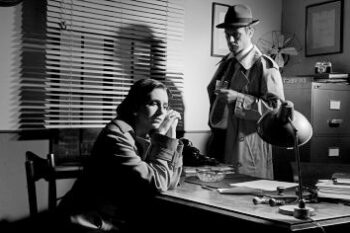 Bankrupt?  But you seemed like a dame that woulda checked the ratings!

Boomer, this is your best option to avoid an annuity headed for bankruptcy.  There are companies that rate the financial strength of insurance companies, such as those selling annuities.  Financial strength is a measure of how likely a company is to thrive or go bust.  Here are the rating companies.

These are companies that have tons of assets and cash flow.  That cash flow comes in handy in sending you your monthly annuity check.  The more conservative a buyer you are, the stronger financial strength you’ll want.  See Table 1.

Table 1. Examples of each agency’s rating designation that might appeal to conservative buyers.

From Josephmbelth.com as reported in Jane Bryant Quinn’s, How to Make Your Money Last:  The Indispensable Retirement Guide.  Simon and Shuster, 2016, p. 129.

Annuity ratings are your best chance of avoiding an annuity headed for bankruptcy.”

These rating companies help you choose a financially sound annuity.  Spend the two minutes and look up your annuity before you buy.  These two minutes can save you profound heartache further down the road.

Look for clues in the free-look period that the annuity will meet your expectations.  It’s your best chance for a no-questions-asked refund.

After you shell out the money for an annuity, the only way to get a no-questions-asked refund is via the free-look period.”

#3.  Know how to access your state’s guaranty fund, should the worst happen.

Do you mind? I’m studying my state’s  guaranty fund.

Each state guaranty fund varies in:

.Here’s what else you should do.

Keep your expectations on the low side.  Don’t necessarily expect to: 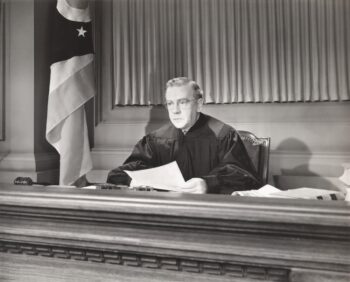 It’s going to take a while for the annuity company to wind it’s way through the bankruptcy court.  Settle in, everybody!

Worse, expect to keep paying annuity fees and any other required payments, while the annuity company winds its way through the bankruptcy and guaranty fund bureaucracies.

Boomer, let this sink in.

Even though the bankrupt annuity company isn’t paying you, you’re generally required to keep paying them.”

Some states vary, but keep this general rule in mind.  For you to receive redress, it’s typically required for your primary residence, the licensed annuity company, and the guaranty fund to all be in the same state.

Seek additional help if you need it.  The folks over at Blueprint Income do a nice job discussing guaranty funds, with helpful links provided.  There, you can check your state’s specific requirement for access to the guaranty fund.  (Scroll down.)

If you need more help, click here for your state’s insurance commissioner.  (Click on the state name.)

My sordid involvement in an annuity bankruptcy. 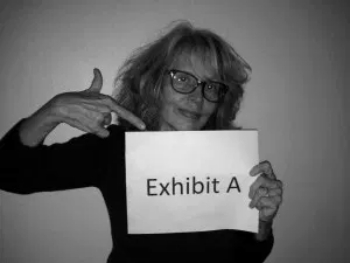 Yours truly, Exhibit A on how not to buy an annuity.

Consider my story to be Exhibit A of how not to buy an annuity.

This, earth angel, is what happens when you:

Don’t be my younger self! 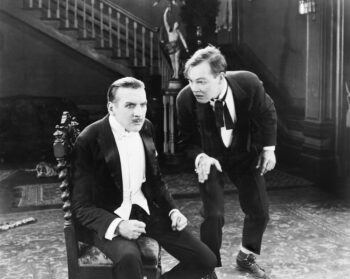 Ya didn’t check the ratings, use the free-look period, or meet the requirements of the state guaranty fund.  Now we gotta eat the cat’s food!

It took four years for annuity owners to receive redress.  And during that four years, annuity owners never received the annuity payments they were due.  However, they had to keep paying their annuity fees if they had any hope of eventually receiving redress and being made whole.

How awful did that have to be for retirees who’d planned on that money?

The rest of the story.

I learned about the bankruptcy of the annuity I’d bought in my graduate accounting class, of all places.  The professor was discussing how the general public needed to be better consumers of financial information–like the kind supplied by ratings companies. If they did, he said, annuity owners would have been spared the heartache caused by the bankruptcy of  “annuity giant“ Baldwin United.

The room began to spin and I couldn’t believe my ears.

I’d just given every dime I had for that annuity.  (Yet another foolish mistake.)  I couldn’t get home fast enough to call the company. 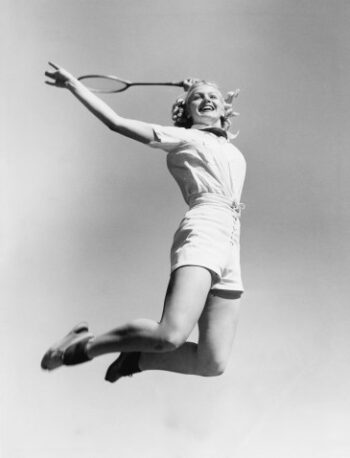 (Almost) nothing is better than getting a full refund!  Am I right?

During the course of the call, something amazing happened right then and there:

In one of those too good to be true moments, I received a full refund shortly thereafter–as always authorized by the free-look period.

Let there be no mistake.  That’s called stupid-dumb-luck.

And let’s not mince words.  I was stupid, dumb, and lucky.

I was also thrilled.

Almost as thrilled as I was when I said “I do” and even more thrilled than when LAPD recovered my car.

Maybe, just once in a lifetime, fortune really does favor the foolish.